Jodie Foster, "Coming Out" and Loneliness 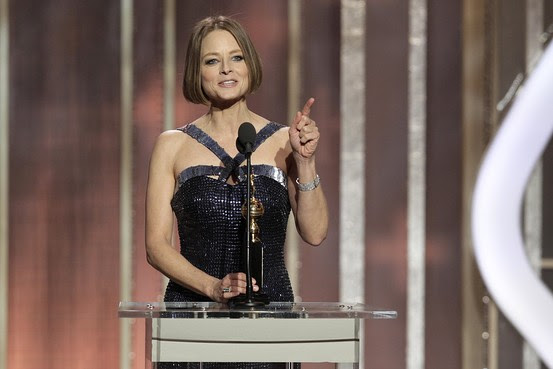 OK, I don't know how many Jodie Foster movies I have seen in my life.  Not too many.  Contact, The Panic Room and a couple of the movies she made when she was a kid.  She seems like a great actress and the Golden Globe committee was right to honor her with a lifetime achievement award.

There's a lot of debate going on within the Hollywood community about her speech.  There seem to be two angles: 1) it was a little confusing or 2) it was pure genius.  I guess this will contribute to the mystique that is Jodie Foster.  Maybe that was the point.  Whatever her goal was, there are at least four lessons that come to mind for anyone who cares about the intelligentsia and media elite of this nation. There is also a message for Jodie Foster, a talented woman who is created in the image of God.

Lesson #1:  Hollywood actors and actresses can only communicate when a professionally paid writer is drafted to write script for them.

I am sure some will scramble to defend the intelligence of someone like Foster on this front, but one sign of intelligence is the ability to communicate what you are thinking without paid help.  By the way, I do understand that this could also be a dig against American presidents.  You can draw your own conclusions.

This little whatever-you-call-it introduced a sort of "coming out of the closet" moment for Foster--at least that is how it is being interpreted.  This in spite of the fact that she has been apparently living with another woman for a couple of decades.

What this part of the speech was is still being debated by those who observe the odd habits of the cultural elite because it wasn't clear.  Perhaps Foster's speech is an example of post-modernism taken to its logical conclusion.  However, here in the United States that exists outside of Los Angeles and New York City, we use clear terms to reveal what we're trying to say.  Especially if it's supposed to be a ground breaking moment like she built this up to be.

Lesson #2:  If said Hollywood actress is a recluse then her strange mumblings will be regarded as "genius."

Maybe this is because they are just happy to get something out of their mouths other than "No pictures please!".  Even the Bible says that it's better not to talk so much because it is wise to keep your mouth shut (Proverbs 17:28).  This has been the perception with Foster because of her reclusiveness.  People have thought the same thing about author J.D. Salinger and Gretta Garbo.  It turned out later that they were just self absorbed narcissists who went crazy trying to protect their own god--themselves.  This just shows that someone appears to have the aura of wisdom because of their silence and good decisions they make about their careers.  Self worship is nothing more than insanity and Hollywood as a whole is Exhibit A.  People are created to give worship to the true and living God.  No one was ever created to receive worship.  When they do attempt to receive worship, it's awkward at best.  Anyone remember Sally Fields' much parodied, "You really like me!" Oscar speech?

Lesson #3:  Total depravity and the accompanying spiritual blindness that comes with it is praised as "bravery" in our culture.

If nothing else, Foster at least introduced the merest possibility that she considers herself to be a lesbian.  Homosexuality is one of many, many sins that are condemned in Scripture. This sin does not condemn Foster (if indeed she is guilty of it) any more than her past lies, stealing, disobedience to parents, greed, self worship, etc., etc. condemn her.  It is all sin.

It's been more than fifteen years since Ellen Degeneres came out on her sitcom and every single time it's done it's called "brave" in spite of the fact that several states have legalized gay marriage and it's more likely than not that most of the rest will do so in the next five years.

Foster's sexual posturing is not brave.  It's not bravery when people flaunt their sin, no matter what it is.  The Bible has another word for it, at least in the old King James Version: "lasciviousness."  The word in the Greek means the public display of sexual promiscuity.  You can veil it with confusing words or postmodern humor but the fact remains that Foster stated that her view of sexuality does not measure up to God's and national television seemed to be a good place for her to announce it.  This is the natural outflow of total depravity and Hollywood is all too eager to push it in front of our faces.  In the meantime we are all too eager to support what they do when we buy tickets to their movies.  We've created and given them the platform.

If you're not convinced regarding the theology of total depravity, please read the Biblical description of human nature in Romans 3:10-18 and then we can talk.

Lesson #4:  Foster's speech was more likely than not a cry for help.

In spite of all of the people she thanked, all of the joy she claims to have, and all of her success, her speech was a cry for help.  It's evident in the punch line at the end of it: "Jodie Foster was here, I still am, and I want to be seen, to be understood deeply and to be not so very lonely."

Wait a minute.  We were treated to six and a half minutes of your assertions that the road you have chosen to walk in solitude has been "beautiful".  A few minutes later you are "lonely."

There's not a chance that Jodie Foster will ever read this, but I hope the readers will humor me for a moment.  Jodie, I believe that you are lonely.  Success does not bring happiness.  Anyone who watches coach Bill Belichick's face after the New England Patriots win yet another playoff game can see abundant proof of this truth.  Joy can only be found in the Author of it: God.  What you have done is what everyone does at one point: they pursue their rebellion against the Author of joy thinking they will find it only to find emptiness after fifty years of the pursuit.   You will never find joy in yourself.  You will continue to be lonely as long as you have yourself as your god.

It's interesting that God has existed from eternity past and never had a single human being to worship Him during all that time and yet He was perfectly content to express love within Himself being the Trinity.  As He stated at the baptism of Jesus, He was "well pleased" with Jesus and He was the object of His Father's attention ("beloved Son").  The truly beautiful thing is that God can love sinners if (and only if) they are "in Jesus".  God chooses to save sinners through Jesus Christ and only in Him can we be accepted and loved.  It is all for His glory and not our own.  Bow the knee to King Jesus and you will fulfill the purpose you were created for: to give Him glory and praise.  Jesus died for sinners and rose from the dead.  Turn away from your self worship and turn to Jesus in faith.

"To the praise of His glory and grace wherein He hath made us accepted in the Beloved."  (Ephesians 1:6)
Posted by Jon Speed at 7:00 AM 2 comments: