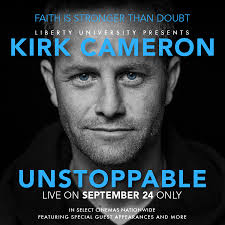 The movie is Biblical, using the scope of redemptive history as an explanation of how God is in the business of redeeming the world from the curse.  In that process, He has reversed the curse of death at the cross and paraded it in the resurrection.  This process is "unstoppable".  What Adam failed to do in the Garden of Eden (crush the head of the serpent that came to deceive Eve in his role as care taker of the Garden) Jesus did at the cross (Genesis 3:15) when He crushed satan's head on behalf of His Bride.

What this means for people passing through tragedy and suffering is significant.  It means that when we bury a loved one who is in Christ it is not the end.  For them, it is the beginning.

What makes this film unique is the beauty in which this story is told.  The movie is visually striking.  So striking, that I will venture to say it is the most beautiful movie that I have ever seen out of a Christian production company.  There are moments in the movie that take your breath away--the depictions of Adam and Eve in the garden, the depiction of Cain killing Abel, and some of the b-roll footage.  Simply put, it's art.  This movie has raised the bar for documentary type films and not just for Christian documentaries.  Hollywood may not recognize it but if Christian producers can consistently make documentaries as visually pleasing as this one, Hollywood's opinion will be irrelevant.  In fact, Hollywood itself will be irrelevant.

The inspiration for the movie is the death of a teenager who Cameron met through his Camp Firefly ministry.  His sincere depiction of the illness and death of this young man as well as the reaction of the family to his death (including footage from the funeral) is a powerful testimony to the truth that Cameron lays out in the film.  It is part of what makes the film beautiful; a glimpse into the life of a family who has faced tragedy head-on and triumphed because of Jesus Christ and His Gospel.

My wife, Kim, wept through much of the movie.  We are coming up on the one year anniversary of the death of my mother-in-law.  She succumbed to melanoma cancer on October 9, 2012.  As a family we are all dealing with the inevitable sadness which comes when you face such an anniversary.  Additionally, we have been passing through a difficult season this past month as we have received news of the moral failures of a couple of friends in ministry.

Unstoppable has been a great reminder about the triumph of the gospel.  In spite of our personal loss and personal pain--and perhaps because of it--the Lord is redeeming this world unto Himself.

This is monumental! I'm glad to hear that the gospel was clearly on display as help for the hurting was shown.

I look forward to seeing it!